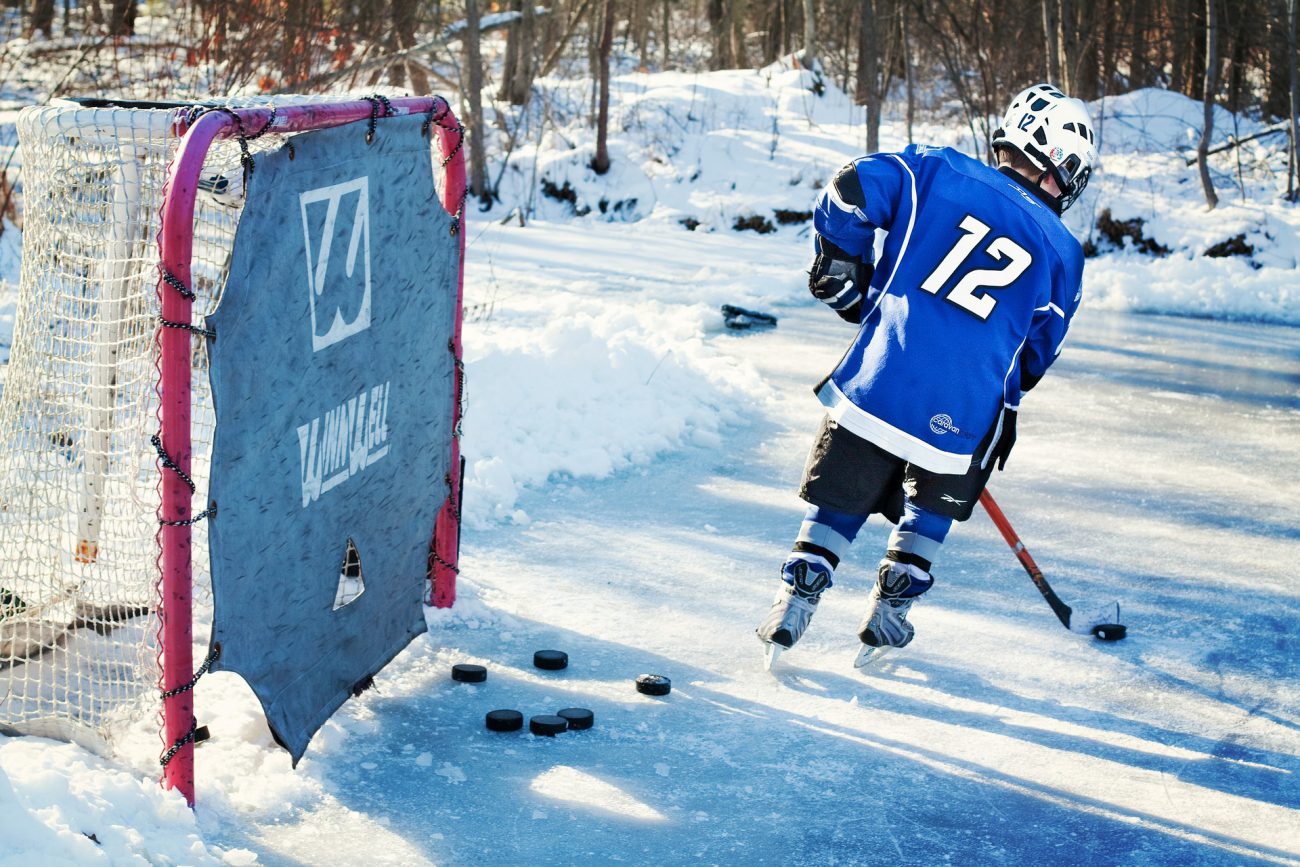 This is said with a heavy heart, but it is time to say goodbye. No, I won’t be out of your life; I just won’t be around as much anymore. This little kid that dreamt of playing at your highest level is turning the page and moving on to the next chapter of his life, and for the first time in my twenty-five years on this earth, you will not be my number one focus.

I was only two when I first met you, and it wasn’t long until I was head-over-heels in love. I couldn’t get enough of you. During the winter months, when practicing all afternoon wasn’t enough, bright spotlights would illuminate my backyard ice rink at night. When summer came around, and most people thought we should take a break, there were endless 2-on-2 games in the driveway with my three brothers. When fall practices began in middle school, and they weren’t supposed to start until 7:30AM, I was on that ice every single day before 6:00AM. Do you remember those 6AM skates? They are some of my favorite memories of us. There is something so pure about stepping on a new sheet of ice with no one else in the arena. I can still feel it now; the crunch of my skates as I carved those first few strides, the tears that welled up in my eyes as that blast of cold air hit my face on my first lap, and the thunderous crack of my stick as I let that first shot go. Like a painter staring at a blank canvas, the possibilities were endless. I had no rhyme or reason for the things I would do during those skates. There was no structure to my drills, no specific skill I was working on. I wasn’t out there early because I needed to get better; I was out there early because I didn’t know better. All I knew at the time was that I would rather spend an extra hour and a half with you than spend it doing anything else. What I learned though, was the harder I worked for you, the more you gave back. Those endless days and nights placed me on some of the best youth teams growing up. By the time I was 12, you had taken me to more states and countries than 99% of the kids my age. Those 6AM skates would end up taking me away from home at the age of 14.

My sophomore year I found myself in Connecticut wearing crimson for the number one prep school team in the country, The Salisbury School. One year and one New England Championship later, I was off to Ann Arbor, Michigan to play for the US National Team. For the next two years I’d be sporting the red, white, and blue while representing my country in tournaments at home and across the world. Then colleges came calling, and I would soon find myself throwing on a familiar shade of crimson.

Without you, I imagine my name would have never crossed Harvard University’s directory.

But there I was, after 18 years of devotion to you, I was attending one of the most prestigious colleges in the world, lacing up the skates for one of the most storied programs in college hockey, and my senior year, captaining this same team. By the end of my senior season, it had been eight years since I first left home for you. I left family and friends and missed countless holidays, and I only returned to Rochester, New York for the summer months. For eight years, I hadn’t played a single game at home. However, being the poet that you are, you gave me an opportunity I will never forget. From the ages of 6 to 12, I played for one youth team, The Rochester Americans. We got our name from our hometown’s professional American Hockey League team with the same name. I grew up going to their games and cheering on the “Amerks”. These were the first professional hockey games I got to watch and I could only dream of what it would be like to play at the same level. When my final season at Harvard concluded, I got the call of my lifetime. My hometown’s Rochester Americans were on the other line. I was going to be heading back home, and for the first time in eight years, I was going to be playing in a competitive game there. Remember how I said there’s something special about skating alone in an empty rink? Well, there’s also something about playing in front of a packed arena. Over the years, I have had the opportunity to play in front of some impressive crowds and in some historic arenas. There were the 15,000 screaming Russian fans at the Under-18 World Championships. There were the rowdy Boston locals that packed Boston’s TD Garden for the annual Beanpot games against BC, BU, and Northeastern. There were even fans that hated my team so much that they threw fish at us (Cornell). However, none of these can ever compare to the feeling I had of finally coming back home and stepping on the ice for my first shift as a Rochester American. Yes, my story with you had finally come full circle. But what really excited me was that nearly all of my family was in the crowd for that game. I felt like I was seven years old again, skating around and just scanning the bleachers for the familiar face of my parents or grandparents. The announcers introduced me over the loudspeaker as I prepared for the faceoff, welcoming me back home, and the crowd erupted. I knew that somewhere in the crowd, my parents, brothers, sister, grandparents, aunts, uncles, cousins, and I’m sure several friends cheered along with them. I held back tears waiting for that puck to drop. I could’ve walked away from you that day and forever been satisfied. But for three more years I gave you my life, jumping at every opportunity, in hopes that one-day, just maybe, I’d get a chance at the big times.

I never did make the NHL, but you sure took me for an exciting ride.

I bet you laughed at me along the way as I tried to make plans. I never knew where you would be taking me next, but I am happy the way things turned out. From Toronto to Germany and then South Carolina to Scotland, you sure had a funny way of showing me around. So as I lace up my skates here for my last game, albeit in the capital of Scotland, I want to thank you for the places we’ve gone together.

I also want to thank you for all the friends you have made me. Sure, they started out as teammates, but as I’m sure you have witnessed, time and time again, these teammates somehow always turn into brothers. Remember all those holidays away from home? It was those teammates that filled that void. We would spend more than four hours together at the arena, only to leave the rink and willingly decided to spend the rest of the day with these same teammates. That’s crazy! I have made lifelong friends through you. I want you to know that my family sends their best as well. I know they’ll definitely miss seeing us together, that’s for sure. They were there from the beginning, and if it wasn’t for them, I can guarantee you I wouldn’t be in this position today. They were there for every high and every low along the way. Every time I wanted to spend more time with you, my parents made sure I got that opportunity. The countless games and practices they took me to, those 6AM skates, without them, there is no us. And to think, they did this all just to see me move away from them at an early age. Yet, they continued to come and watch me. I don’t even want to think about how many miles they have put on their cars or the number of sleepless nights spent driving to catch one of my games. So as I take those first few strides in warm-ups today, I’ll remember all those early morning skates and how I went from that little kid who couldn’t make it lap around the ice without falling to the player I am today. When I line up for my first faceoff, I’ll imagine the roaring crowd of my family from that first game back in Rochester. When we get that first goal, and I celebrate with my team, I’ll remember the hundreds of brothers I’ve met over the years. And when that final buzzer ends on my career, I will smile and shed a few tears as I say goodbye to you.

I’m not afraid to move on. I am excited for the future. I know that everything you have taught me will allow me to succeed. There will still be early mornings and endless nights, new adventures and new friends, and I can only hope that I embrace them with the same love and passion as I did for you. Thanks again for everything, old friend.